Chess players gain rating points when they win games, and lose rating points when they lose games. But how exactly are these points calculated? Well, according to the USCF Official Rules of Chess, “The rating system is based on the theory that the rating difference between two players corresponds to their expected score with each other.” Note that the expected score ranges from 0 to 1 points. (1 point = win, 0.5 points = draw, and 0 points = loss)

The formula used to calculate the expected score of Player A is given by a logistic curve:

Likewise, the expected score of Player B is:

How to calculate the updated rating after a chess match?

Once we have our expected scores, we can use this number to calculate the updated rating for each player after a game.

Suppose Player A was expected to score EA  points but actually scored SA points. The formula for updating their rating is:

a.) Calculate both their expected scores going into the match.

b.) Calculate their final rating after the result.

a.) To calculate the expected score, we should use the logistic curve formula:

Now substitute the values, we get: 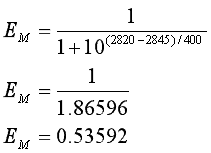 Therefore, Magnus Carlsen expected score against Fabiano Caruana is 0.53592 which is approximately equal to 0.5 (draw).

b.) Calculate their final rating after the match

The Final rating for Magnus is:

The Final rating for Fabiano is:

There you have it. This is exactly how your chess rating is calculated after every chess match you play. Easy right?

If none of this made sense to you, then you can go to the official FIDE chess rating calculator. It will calculate your exact rating after a chess match without you having to do all the brain work. Just simply place in the ratings of both players and the actual score from the match. You are then good to go!