In chess games where players use time control, adjacent game clocks (consisting of two buttons) may be used. One button stops the clock and the other starts the timer. These buttons prevent the clocks from simultaneously running. The clocks can either be digital or analog. Before the game starts, the arbiter has to decide which kind should be used for the game.

How Does A Chess Clock Work

How does a chess clock work? A chess clock is really made up of two separate clocks combined into one so that only one of them runs at a single time. One clock starts when it is White’s turn to move and the other clock goes when it’s Black’s turn.

Each chess player is required to make a certain number of moves in the time allowed.

For major Fide events, each player is given a time control of 90 minutes to make a total of 40 moves, after which 30 minutes is given to each player to complete the game. At the start of every chess game, Black start’s the clock for the white player to make his or her move. After every move, the players push a button which stops their own clock and starts the opponent’s.

If the time runs out for one player, then a flag will be indicated with a “beeping sound”. That player would have lost the game because his flag fell without making the required number of moves. 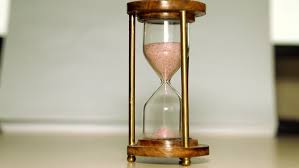 Historically, the first ever clocks used to record game time in a chess tournament were back in the early 19th century. In that era, hourglasses with sand were common clocks, keeping track of the time spent to finish the game.

Each player had separate hourglasses to track time. They were eventually replaced by connecting two analog clocks. The time on one player’s clock starts ticking as soon as the other one makes a move and punches the clock. 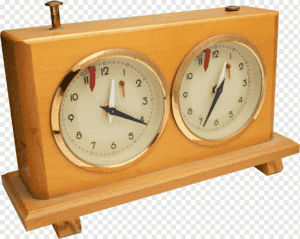 In the analog clock, a flag will be sandwiched between 11:00 and 12:00 on both clocks. Once the minute hand comes closer to 12:00, the tip touches the flag and the clock continues to move ahead. This moves the flag from a vertical position to a horizontal one. Once the hand reaches 12:00 again, the flag drops. If the player hasn’t made any moves within that time, it will be recorded as a time loss. 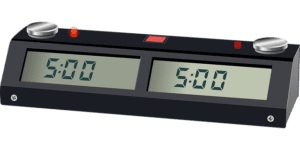 These days, digital clocks, which allow players to more effectively control time , have become more popular. Whenever a player makes a move, they punch the clock, and it saves additional time.

An important feature of chess clocks is their sturdiness. During a match, players under pressure tend to punch the clock hard and sometimes even knock them to the floor. This is seen mostly in times of trouble and during blitz games.

Another quality to note is loudness. The clock has to be audible, but not distracting

You should also have a travel chess bag, which makes it a lot easier to carry your board, chess clock, pieces, and other equipment.

This is especially important for tournament players in the United States. In Europe, tournaments provide players with all necessary equipment.

>>Check out the best chess bags for storage and travel<<