How did we came up with this number? Well there are many different-sized squares on the chessboard and not just the 64 identical squares. Below is a table that shows the various different sized squares on a chessboard. All we have to do is just add them all up to get the total.

This 8 by 8 grid results in 64 alternating colored squares. 32 of which are light squares and 32 dark squares. All 64 squares are identical in length and the board should measure the same on all 4 sides. You need to set up the pieces on their correct squares before you start. See how to setup chessboard the right way

Setting up your pieces is pretty easy. The back row is always set up like this, with the King and Queen in the middle squares of the back row. The Bishops are on either side of them, then the Knights then the Rooks in the corner squares. 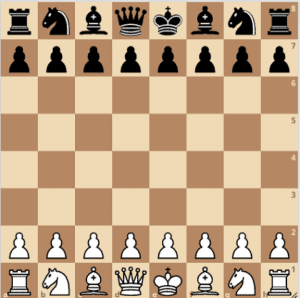 Types Of Squares On A Chess Board

The 64-square chess board is made up of 4 different types of squares. These are:

Each chess piece moves on a different type of square and their characteristics vary.

The four center squares marked red (d4, d5, e4, e5) are very important because if occupied or controlled, they enable a piece to have control over the whole board. Its principled for the pawns to occupy these central squares because they help to control the center in the initial stage of the game.

Its important for every chess player to fight for these 4 squares if they wish to have any sort of advantage over their opponent. Not only should you fight for center squares, but you must play in the center of the board which is an important principle in chess.

Here is a perfect example of a game that demonstrates the importance of occupying the central squares and how one player suffered from breaking that principle in the blink of an eye. 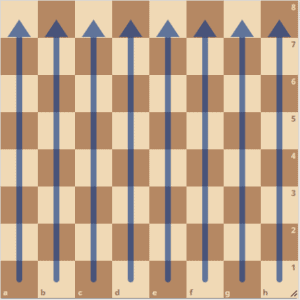 Squares running from top to bottom are called files. The pawns usually move a long the files in a forward direction. In chess, its important to open up files for your Rooks because they move vertically and horizontally. You can open up files by exchanging pawns in the center of the board.

Leaving a file closed can cause your rooks to remain passive and they wont co-ordinate well. With an open file, the rook can move up and down the board freely and attack weak enemy pawns that are backward and isolated.

Squares running from left to right are called ranks. You have the back ranks, the seventh ranks (a.k.a seventh heaven), 3rd, 4th, 5th and 6th ranks. Similarly to files, the Rooks need access to ranks especially the seventh ranks where the enemy pawns are a target.

The seventh rank is deep into your opponents territory and is where your opponent’s pawns begin their journey. If you can get both your Rooks on to that seventh rank, you will gain a lot of power. They will work together and gobble up any other piece in their path. 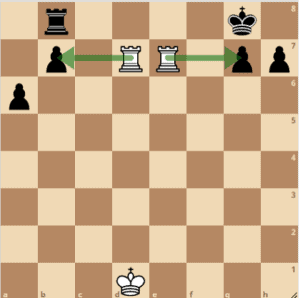 Its seventh heaven and the two rooks have complete dominance over the 7th rank. The two rooks are able to zoom up and down the seventh rank and chop off all the pawns. All in all Rooks on the 7th rank give you much greater chances to win.

Squares running diagonally are called diagonals. There are 26 diagonals in total. The longest diagonals are A1-H8 and A8-H1. The bishops usually move along the diagonals of the chess board up and down.

If you can get two bishops on their open diagonals in harmony with one another, then you may have a great advantage over your opponent. The two Bishops on their longest diagonals can slice the board and eliminate any piece that comes in their way.

Bishops on long diagonals are a great way to pin enemy pieces and create tension. Pinning the enemy pieces will limit your opponent’s activity and in turn increases the  activity of your pieces.

How Are The Squares Identified

Every 64 square on a chess board has a unique identifier and each piece has its own outline shape, which you see used in chess quizzes on computers and in newspapers. The squares are identified by a number and letter of the alphabet. Letters run across the chess board horizontally. These are a, b, c, d, e, f, g, h, while numbers run up the chess board and are numbered 1, 2, 3, 4, 5, 6, 7, 8.

All 8 numbers and 8 letters that run up and across the chess board helps to identify a particular square on the chess board. The alphabet is placed before the number. For example a1. There is also two sides of a chess board. The side that has the King is called the Kingside and the side that has the Queen is called the Queen side. This helps to denote when a King decides to castle Kingside or Queenside. 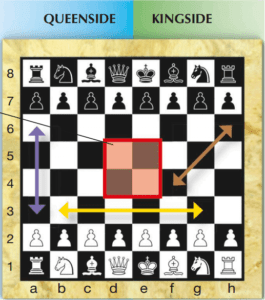 Size and Color of the Chess Squares

According to the United States Chess Federation, the size of each individual square on a chess board should be anywhere between 2 inches to 2.5 inches in length. All squares are identical in length and the colors alternate on the 8*8 grid.

The colors are not subjective but the most popular colors used are black and white. Colors should be used appropriately. Sometimes a brightly colored chess board can affect the mood of the player and throw them off from concentrating.

Here is a list of acceptable colored squares that can be used on the chess board:

These are just some of the colors that can be used on the chess board. Just remember that brightly colored chess boards are not appropriate. (Example yellow, red, bright orange, bright purple)

Other Variants Of Chess

We’ve looked at the number of squares on a 8 by 8 grid chess board. But did you know that you had different size chess boards with different number of squares? If you’ve read my article, where was chess invented, you will see that there were several variants of chess for different countries played back in the older days.

For example, the variant of chess in Mongolia was known as Shatar which consisted of a large 10 by 10 board. The chess pieces were named differently and they depicted the names of animals. Example, Bishop was called Camel and the Queen was called the Dog(Guardian)

The table below shows the different variants of chess, grid size of chess board and the total number of identical squares.

In the game of chess, its important to control as much squares as you can to gain power and control over the board. You gain control over squares by developing your pieces especially towards the center of the board. Sometimes it means sacrificing a piece just to gain more activity.

If you obey this one principle, you can get great attacking chances as early in the opening, because your army is fully loaded and ready to penetrate into enemy territory.