Brief Origin of the English Opening

The English Opening derives its name from its association with the Englishman Howard Staunton, who played it six times against St.Amant in in their 1843 match, and also in the historic London tournament of 1851. Staunton and his contemporaries understood many of the strategies that today we call “hypermodern”. 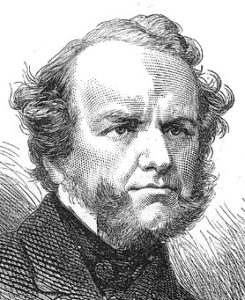 Well known veteran Paul Morphy’s disdain for this opening caused it to fall out of fashion, and it remained so for an entire century. A few daring explorers, such as Tarkatower, Rubinstein and Nimzovich, ventured it occasionally prior to World War II, but since then the English has become routine. It was adopted by Botvinik, Karpov and Kasparov in their successful World Championship matches, and Fischer’s choice of it against Spassky in 1972 was a sensation that ended his hitherto unswerving devotion to the he king’s pawn.

Characteristics of The English Opening

English Opening is characterized by its fluid pawn formations and vigorous struggles for central control. Often White will continue his initial queenside thrust with a fianchetto of his king’s bishop and an attempt to establish a grip on the light squares. Black may counter this by taking the White side of a Sicilian defense with colors reversed, or by attempting to transpose to one of several queen pawn openings, such as the Queen’s Gambit Declined, The King’s Indian or the Dutch Defense.

The independent alternative is the Symmetrical variation, which is rich in possibilities ranging from countergambits and aggressive isolated queen pawn formations to cramped but dynamic hedgehog setups and the quiet, subtle manoeuvring of the Ultra-Symmetrical Variation. It is natural to treat the English as a Sicilian dragon reversed, but the results are often surprising.

How To Play The English Opening

The English Opening begins with the move 1.c4

Starting position of the English Opening 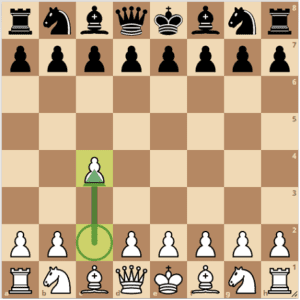 With this seemingly innocent introduction of the game, White is actually launching a deep strategy for central control and he’s also trying to steer the game towards positional waters in which his opponent might be less comfortable.

Strategy In The English Opening

With pawn 1.c4 White begins a profound plan to take the light squares under full control and to restrain Black from achieving natural play in the centre. White decision to delay moving his central pawns in front of his king and queen has two important benefits:

Key Idea In The English Opening

One of the key ideas in the English Opening is that pretty quickly, White is going to fianchetto his light squared bishop. Since there is no pawns sitting in the centre, the bishop will be quite a monster on the long a8-h1 diagonal. This is also another interesting benefit of the English Opening. In fact, White usually combines the moves, 1.c4 with the fianchetto of his bishop and bringing the b1 Knight to c3. 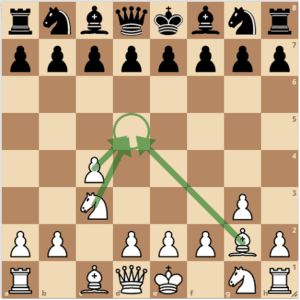 These three 3 moves by White contributes to clamping down on the light squares, thereby making it difficult for Black to target his counterplay.

In the position below, Black uses a typical King’s Indian setup to battle the English opening. You’ll see this setup quite often. 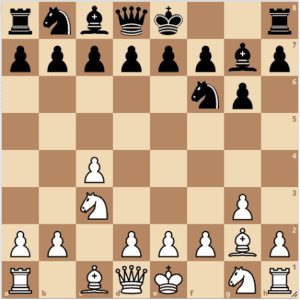 Here, White could simply transpose into a normal King’s Indian line by playing pawn to d4. This move will leave white with a typical position with extra space and plenty of ideas to look forward to in the later phases of the game.

On the other hand, Black now has a clear point of counterattack and hope to one day attack the centre and the weaknesses that have been left behind.

But, since White is aiming for an English Opening, he’ll tend to build up his central or his queenside attack first, rather than trying to seize so much of the centre and taking on some of the risks that come along with that.

Plans For White In The English 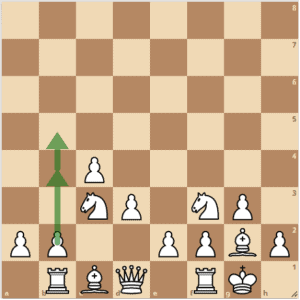 One typical plan White can use in the English is to complete development with moves like Nf3, pawn to d3, castle, Rb1 and then build up his queenside attack with pawn to b4 and pawn to b5.

White will slowly break down some of Black’s defenses on the queenside, thereby gaining space, stretching out and seeing how much attack he can get. While in the meantime, it’s harder for Black to know exactly where to aim his counterplay.

If we should observe white’s structure ,There’s not much weaknesses in his position. Even the dark squares can be supported later by pawn advances in the centre. White’s pawns have remained flexible. This flexibility is one of the main ideas in the English Opening.

Botanic System Of The English Opening

The Botanic system begins with the paradoxical move pawn to e4. This might look a bit strange since we talked about the idea of not blocking in the light squared bishop. But, in fact there are some benefits in playing this way. This is a super solid setup for White, and now the grip on the light squares is quite huge with the help of pawn to e4. This also makes it very difficult for Black to break through with …d5 in the future. 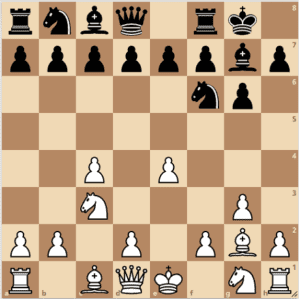 As play continues, White often has more options than just to build up a queenside attack with b4-b5. He could certainly break through on the kingside in these kinds of position with pawn to f4 after castling kingside.

It’s another benefit of this line as it allows you to look for play on both flanks if you choose to with White. 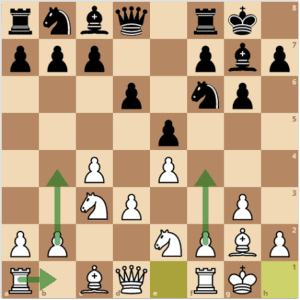 Now, let’s go into some of the most popular setups for Black. Without a doubt one of Black’s major ways of combating White’s light square strategy is to play for a counter imposing grip on the dark squares.

Black can do this on the first move with the aggressive move pawn to e5. This sets up a position known as the Reversed Sicilian. 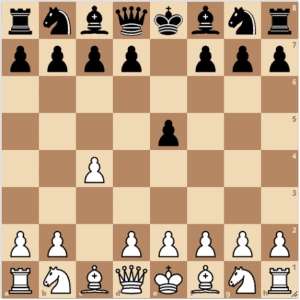 This is one of the most fundamental setups for the English Opening. With this move, Black is aiming to get control over the dark squares especially the d4 point. Later after completing his development, he’ll want to expand with pawn to f5 and start building a king side attack. Black might even try to achieve d5 very quickly to see if he can achieve some equality on the light squares. 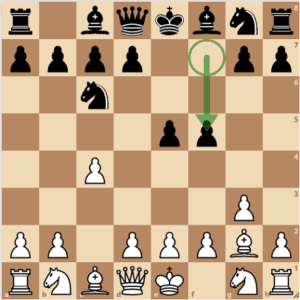 Here, Black select 3…f5 right away which is known as the Reversed Grand Prix attack. After developing his pieces behind the pawns, for example 4.Nc3 Nf6 5.e3 g6 6.Nge2

Black is all setup to playing for a standard kingside attack maybe by breaking with pawn to f4 at some point. Meanwhile, White has an effective counter grip in the centre and long term play on the queenside. 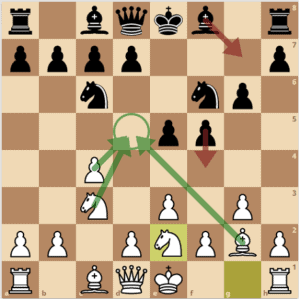 Here, White is ready to hop his knight to d5 and is preparing to break with pawn to d4. Notice how many key central squares that the kingside pawns are taking control over (d4,e4,f4 and g4). Therefore Black has plenty of space to us at his advantage.

Of course, White does not need to be overly afraid as there are some good ways to keep the situation under control. However, this highlights the point that Black doesn’t have to just sit around and wait for White to build up his own attack on the centre or on the kingside.

Another more restrained approach after 2…Nc6 is to avoid playing f5 too early and instead fianchetto his kingsided bishop.

Here, in comparison to the King’s Indian setup, Black has already setup a pawn on e5 which definitely restrain White from achieving any pawn to d4 ideas. Black has also postponed figuring out what to do with his king side knight.

This means that Black might have some extra options either to play Nge7 or Ngh6 where it wont be blocking the bishop. Black may still in this position choose to expand with f5, but he’ll probably hold off until it’s a little bit better supportive.

Other Strategy for Black – Reversed Dragon

Black’s strategy however, doesn’t simply have to be based around dark square dominance. He may also try to struggle for equality on the light squares. This is done by trying to achieve a d5 break as quickly as possible. Since White is struggling to get control over that square very quickly, Black has to act pretty fast in order to pull that strategy off.

One way to do this is to play 2…Ngf6 3.Bg2 and now 3…d5! This is called the Reversed Dragon. Now, after 4.cxd5 Nxd5 a very interesting strategic situation arises.

Black has managed to move his d-pawn to get rid of that bind that White was trying to setup on the d-5 square. And so he’s freed up his pieces quite a bit. On the other hand, White still has a 2:1 central majority, which means that he’ll have a easier time restraining Black’s play and may also try to get some aggressive chances in the centre at a later time.

Also, Black’s strategy has not done anything to dampen the power of the light square bishop on g2. So White can still aim for a queenside attack later on in the game.

White has simply played normally and he’s ready to now expand on the queenside with b2-b4-b5. The appealing aspect of this setup for Black though is that he’s not at all cramped and even holds some extra scope for his pieces since the e5 pawn is actually pretty well advance here. This is one popular way Black can gain his d5 advance

There is another way for Black to play for a d5 advance which leads to a totally different situation. This is to play 3..c6 before playing 2..d5 right away.

Now, we’re aiming to recapture with a pawn. On the contrary, the disadvantage is that Black is announcing his intention, and he gives White the ability to take strong counter measures right away. This is normally done with the reply pawn to 4.d4 which is a great move by White.

Now after 4…exd4 5.Qxd4 d5, Black is always going to be eventually saddled with an isolated pawn when White is ready to capture on d5.

Play usually continues 6.Nf3 Be7 and now there’s an exchange which takes place on d5.

Black’s weakness on d5 is probably not completely compensated for by the open files that Black has and the open piece play. This gives White a small plus advantage. But, since Black has achieved pawn to d5, he doesn’t have too many problems finding active positions for his pieces, and this is pretty attractive for Black as well.

Black should have no problems finishing development and getting a decently balanced game here.

Summary of The English Opening

I hoped that this article has helped you to clarify some of the major ideas of the English Opening. White is launching a strategy to really take the light squares under control and Black has quite a few different options to choose between.

On the one hand, if he plays d5 very quickly, he solves a lot of his problems, but he creates some other unique positional problems. On the other hand, if he takes on a closed game, White might feel a little bit more comfortable psychologically as he can always play for the same plans. And, he might also end up being just a little bit faster, since he’s delayed moving his pawns in the centre.

There’s certainly plenty of fascinating information in the English Opening and I hope you’ve learned a lot from this article.