Starting position of the Sicilian Sveshnikov 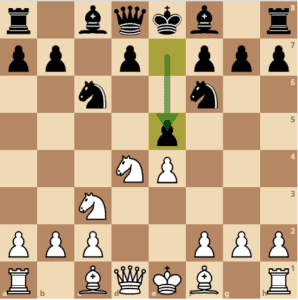 The Sveshnikov Variation is a modern, aggressive and uncompromising way to play the Sicilian. On move five Black immediately strikes in the centre with his e-pawn, attacking the white knight on d4 and forcing it to move from its central post. Emanuel Lasker first brought this move to prominence when he tried it in his 1910 World Championship match with Carl Schlechter.

The defence didn’t really catch on, even after the Argentinean 1M Jorge Pelikan injected some new ideas for Black in the 1950s. The opening only really began to achieve widespread popularity in the 1970s, when the young Russian player Evgeny Sveshnikov refined the system and used it with great success.

Players of all standards began to appreciate its potential and now there is hardly a major international tournament without a Sveshnikov battle or two. A word or two about the name. In its time the variation has been referred to as the Pelikan or even the Lasker-Pelikan, but most players now refer to it as the Sveshnikov (at least the variation beginning with 8…b5).

The following sequence of moves has been repeated thousands of times in club and tournament chess. It is worth a little time and space, however, to explain just what each side is trying to do.

So far we’ve concentrated on 2…d6, but 2…Nc6 is a popular move which can introduce quite a few Sicilian variations, for example: the Classical, the Taimanov and the Accelerated Dragon

Immediately White must make a decision with his knight.

So-called ‘normal’ Sicilian rules do not quite apply here. In the Najdorf Variation we are used to seeing the knight retreating to b3, or possibly f3, but here the white knight ventures to b5. There are two reasons for this. Firstly, the one major negative effect of Black’s previous move is that the d5- and d6-squares are now permanently weakened and are thus difficult for Black to defend.

By playing Nbd5, White immediately homes in on the weakness of the d6-square. For example, the move 6 … a6?! is simply answered by 7 Nd6+ Bxd6 (who would want to play 7 … Ke7 here?) 8.Qxd6 and Black really misses his dark-squared bishop.

The other reason for 6 Ndb5 is that simply no other move challenges Black’s basic strategy. For example: 6.Nb3?! Bb4! and Black has it all: he is ahead on development, threatens the e4-pawn and will follow up with the freeing … d7-d5.The only other vaguely challenging move looks to be 6 Nf5, but Black has a good and direct answer to this: 6 … d5!, uncovering an attack on the f5. Mter 7 exd5 Bxf5 8 dxc6 bxc6

Black is very comfortably placed. It should be said that 6 Nxc6? would be an instructive error on White’s part. After 6…bxc6 Black strengthens his centre (especially the d5-square) and prepares to play the … d7-d5 advance.

WARNING: White should have a good reason for exchanging knights on c6, especially if Black can strengthen his centre by recapturing with the b-pawn.

A necessity. Black must prevent the white knight from entering the d6-square. Now White has succeeded in preventing Black from playing an early … d7-d5 and the bishop on f8 is hemmed in behind the d6-pawn. On the negative side, the knight on b5 will soon be forced back to a miserable square on the side of the board.

A very logical move, pinning the f6-knight to the black queen. White will soon be able to inflict more weaknesses in the black camp. A totally different way of playing the position is with 7.Nd5!? Due to the threat of Nc7+, Black is forced to play 7…Nxd5 and after 8.exd5 a position untypical of the ‘normal’ Sveshnikov is reached. One advantage for Black over the usual lines is that the ‘hole’ on d5 has been

filled by a white pawn and this square is no longer a weakness in the black camp. One possible variation is 8 … Nb8 9.c4 a6 10.Nc3 Be7 11.Be2 0-0 12.0-0 f5, after which White will try to utilise his pawn majority on the queenside. In contrast, Black will look for counterplay on the kingside, where he has the extra pawn.

Pushing the annoying knight away. 7…Be7? is a mistake: following 8.Bxf6 Black must still capture with the g-pawn as 8…Bxf6 allows 9 Nxd6+. 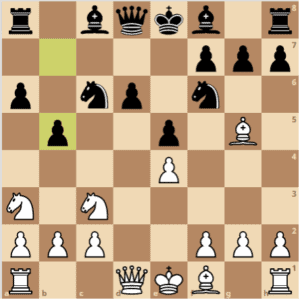 In the early days of this line, black players were opting for the developing move 8…Be6, but the text move is much more to the point. Crucially, Black’s lunge on the queenside prevents White’s knight on a3from re-entering the game via c4. A by-product of 8…b5! is that Black also threatens a simple pawn fork with …b5-b4.

This is the main starting position of the Sveshnikov. Structurally,Black’s position is a little bit of a mess. White has total control of the d5-square and on White’s next move he can inflict more weaknesses on Black with 9 Bxf6 gxf6 (9…Qxf6 10 Nd5 is good for White – see later). The one big price that White has to pay for all this structural

advantage is that he currently possesses the worst placed piece on the board: that poor knight which has moved four times only to wind upon the miserable a3-square. White will inevitably have to spend time relocating this knight to greener pastures and Black can put this time to good use and develop the potential he has in his position. There are two main lines for White from this position and we will look at them both in turn. 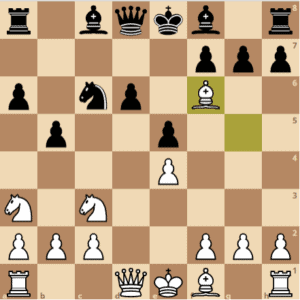 Occupying the juicy d5-outpost and taking care of the … b5-b4 threat.

With this move Black starts his fightback for the control of the centre. Striking out with his doubled f-pawn, Black hits White’s important e4-pawn, which at the moment guarantees White control of the crucial d5-square. Another way for Black to play the position is with 10 … Bg7, preparing …Nc6-e7. But not the immediate 10 … Ne7??, which allows an embarrassing mate in one with 11 Nxf6!

A typical move in the Sveshnikov. White begins the slow relocation of his worst placed minor piece, which will want to re-enter the game via c2 and e3.

NOTE: The relocation of White’s a3-knight is an integral part of the Sveshnikov.

You’ll not be surprised to learn that White has other choices here. The most extreme of these is the speculative sacrifice 11.Bxb5!?, a direct attempt to. blow Black’s position apart. After 11…axb5 12.Nxb5 Ra4 13.Nbc7+ Kd7 there are massive complications, but Black seems to be holding his own, as long as he knows what he’s doing. Another try for White is the developing move 11 Bd3, the subject of Game 26. Finally, there is 11 exf5, which can transpose to the text after 11…Bxf5 12.c3 Bg7 13.Nc2.

White has spent nearly half his moves on this one piece! Finally the knight rejoins the main action in the centre, gaining time by attacking the f5-bishop.

The strongest retreat for the bishop. From here it can keep an eye on both the d5- and the f5-squares.

White finally develops the fl-bishop and prepares to castle. Another possible way forward is with 15 g3, intending to fianchetto with Bg2. 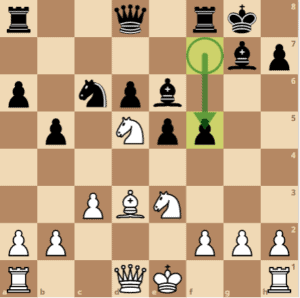 The diagram above is a very sharp position in which both sides have chances to play for the initiative. Black’s pawns on e5 and f5 very often hold the key to the position. If they can advance forward freely then Black can sometimes flood his pieces in behind them and produce a very strong attack against the white king. However, each advance has its negatives as well as its positives.

If Black plays …f5-f4, then this brings White’s bishop on d3 to life. With a white queen on h5, Black would already be threatened with checkmate on h7. The other advance, …e5-e4, blocks out White’s light-squared bishop but presents.

White with the use of the f4-square for the d5-knight. It follows that Black must be very careful with these advances. On White’s part, he may attack Black’s pawn structure with a timely a2-a4 or f2-f4. If White can exchange light-squared bishops Black sometimes has problems defending all of his weak squares. Black has more pawn weaknesses and these often become more important as the game goes on.

Once the players reach the above position, general principles along with a little theoretical knowledge should be sufficient. Black players, however, should be wary of earlier possibilities for White, including 11.Bd3 and the ultra-sharp 11.Bxb5!?

This is a very popular line, with over a third of all games with 5…e5 reaching the position after 9 Bxf6 gxf6. I found nearly 6,000 games in the Mega Database , with White scoring 54%. The complexity of the positions is reflected by the fact that 69% of the games lead to decisive results. 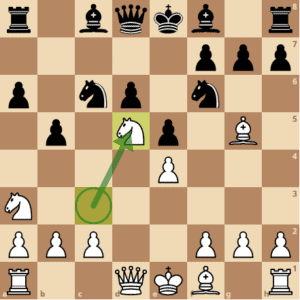 Instead of capturing on f6, White intensifies the pin by moving the knight to d5. This is the main alternative to 9.Bxf6.

Breaking the pin and forcing White to reveal his hand. 9…Qa5+!? 10.Bd2 Qd8 is a cheeky idea, challenging White to find something better than just to repeat moves with 11.Bg5. If White is looking for more than a quick draw then he can play 11.Nxf6+ or en?ter the complications of 11 c4!?

The most logical choice. White keeps the powerful knight on d5.10…Bxf6 11.e3  Once again White aims to regroup his worst placed piece.

The knight is once again heading for e3, where it supports the other knight on d5. Also, by vacating the a3-square, White paves the way to strike on the queenside with an early a2-a4.

A useful move. Black relocates his traditionally ‘bad’ bishop so that it has the opportunity to exchange itself for the knight when it reaches the e3-square. Another positive feature of this move is that it prepares an eventual pawn break with …f1-f5 (possibly supported by…g7-g6).

NOTE: A ‘bad’ bishop is one which is blocked by its own pawns.

Attacking the black pawn structure on the queenside and bringing the a1-rook into the game. 13.Be2 followed by 0-0 is a less aggressive way to play the position.

NOTE: The move a2-a4 is a common attacking tool for White in the Sveshnikov.

The simplest solution to the problem of the attacked pawn. 13…Rb8 14.axb5 axb5 gives White the a-file and leaves the isolated b-pawn very vulnerable.

This pawn is easier to defend on a5 and Black can now consider activating his own queenside rook with …Rb8.

It’s fair to say that 9.Nd5 usually leads to quieter and more strategi?cal positions than 9.Bxf6. White will complete development before trying to exploit his better pawn structure. White is actively placed on the queenside and often seeks to create a dangerous passed pawn on this wing with b2-b4.

Black’s counterplay is once again based on kingside operations. The usual pawn break is …f1-f5, often supported by …g7-g6. The game often hinges on the respective speeds of Black’s and White’s attacks on the opposite wings.

9.Nd5 is less theoretical than 9 Bxf6 and Black is less likely to getwiped off the board if he is unsure of the correct move-orders.

9.Nd5 is very similar in the popularity stakes to 9.Bxf6. I found justover 6,000 games in Mega Database, with White scoring a lowerthan-average 51%. The positional nature of this line is reflected in the number of decisive games, which at 62% is lower than average and especially low for the Sveshnikov.

Summary – Key Ideas In The Sveshnikov

1) The Sveshnikov is different to many Sicilian lines in that Black accepts structural weaknesses in return for active play.

2) White should follow the main lines with 6.Ndb5, as alternatives present Black with a very comfortable position.

3) The 9.Bxf6 line usually leads to very sharp play and is well suited to tactical players.

4) In contrast, the 9.Nd5 line is quieter and more suited to positional players.