In this article, we shall take a look at the famous King’s Gambit opening which begins with the moves 1.e4 e5 2.f4

With this aggressive pawn sacrifice, White is trying to open lines and seize control of the center as quickly as possible. But if Black has done his homework, he shouldn’t have too many problems getting an interesting and balanced position against the King’s Gambit.

How To Play The King’s Gambit

With the opening move, 1.e4, White is hoping to seize dominance in the center with the follow up move, d2 to d4. Both the Black’s most popular replies, c5 the Sicilian and e5 the king’s pawn game, are directed against this plan.

After the move, 1…e5, White’s most classical plan is to play 2.Nf3 and over the long term, he plans to resume his aim of bringing the pawn to d4 usually by first playing the move, c2 to c3. But, White has a radically different approach available on move 2 with the move, pawn to 2.f4. 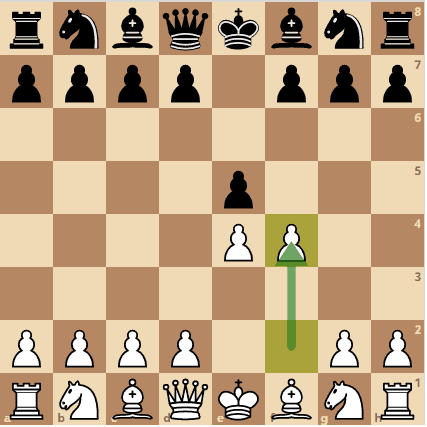 This is the distinguishing move of the King’s Gambit. As you can see here, at the moment the f4 pawn is undefended, so that if Black simply plays 2…exf4 accepting the gambit, Black can actually remain up a pawn for quite some time.

But White reasons that his long-term ability to achieve a powerful central duo with d2 to d4 will fully compensate for this loss.

Another main point for White here is that if he manages to regain the pawn on f4 without too many problems, he will achieve an excellent attacking position since the F-file has opened up in advance and White will have a full central presence. But as they say, a pawn is a pawn.

Strategies In The King’s Gambit

Black is going to spend some time either holding on to the pawn, or he’ll use the extra time which White devotes to recapturing the pawn to counter attacking in the center.

Another big downside to White’s strategy in this position is that 2.f4 has somewhat weakened the king’s position, and in this case it has made the king vulnerable to the check on h4 (…Qh4+).

It is this factor which somewhat restricts White’s options in the King’s Gambit. For example, if White was to play the move 3.d4 immediately, a very attractive move on its own right, he would instantly encounter 3…Qh4+ when he will lose his castling rights. White have to bring the king to the awkward square on e2 where it interferes with development and is vulnerable to an immediate attack.

Instead, after pawn 2…exf4 accepting the gambit, White’s main move is 3.Nf3 preventing the check and adding support for a later d2 to d4 move.

Now, Black has a few interesting ideas here. But the oldest and most traditional mainline is the aggressive 3…g5 defending the f4 pawn and creating the threat of pawn to g4 followed by that check which we just saw on h4.

For example, if White was once again to play 4.d4, Black could simply follow up with a strong move, 4…g5

So, in this position, White is immediately faced with a serious task.

Mainline with 4.Bc4: Muzio Gambit.

In fact, two moves have been played quite often here. One idea here is the move 4.Bc4 in which White intends to play a dramatic piece sacrifice.

After the move, 4…g4, which we said creates serious problems for White in this position, White’s response is actually simply to castle king side 5.0-0 offering a full piece on f3. This is known as the Muzio Gambit.

After the moves, 5…gxf3 6.Qxf3 we reach an extremely interesting position in which White has sacrificed an entire piece for several tempi in development.

If you look for a moment, you will realize that Black has not developed a single piece in this position. So, he not only needs to figure out how to bring his pieces into the game, but he also needs to focus on fending off this violent attack.

If you pay close attention, you’ll also notice that White is starting to build pressure on the f7 point if only he can play the move, queen takes f4.

Since Black has no intention of letting White takes queen f4 without a fight, Black’s main move here is 6…Qf6.

Black simply demands that queens be traded in the event of a capture on f4. Now, right away you’re probably asking what happens if White simply continues to build this attack on f4 with the move, 7.d3, adding the dark squared bishop to the attack on f4?

In this case, I think it’s quite simple for Black to simply play bishop to 7…Bh6, continuing to make it difficult for White to recover his pawn without accepting some exchange of pieces. Remember that exchanges of pieces are always bad or particularly bad when you’re down in material.

This is definitely not to White’s advantage. So, believe it or not, White’s main idea is to continue to sacrifice more material in this position with the move, 7.e5! Qxe5 and now another sacrifice, 8.Bxf7+ Kxf7 and another sacrifice 9.d4 with the idea that if Black plays 9…Qxd4, White will play 10.Be3.

The whole point of this position is to reach this amazingly complicated position where yes, Black is ahead two pawns, but he’s going to come under severe attack very quickly.

Sadly, the details of this position are a topic for another day, but judging by recent games, the modern opinion is that while Black should be OK here, White has a surprising amount of compensation for his material.

This is a very double-edged position with big winning chances for both sides.

Backing up to the position after bishop c4, the Muzio Gambit is a very interesting idea for White. However, fortunately for Black it’s actually not too difficult to avoid.

Modern players have begun to prefer this simplistic move, 4…Bg7, just getting a little development going in the position.

Now after the move, 5.d4 , Black responds with 5…d6, disallowing that pawn from having maximum flexibility in this position.

Now often, Black over the long term will probably play h6, shoring up this pawn chain and just holding on to that extra pawn for as long as he possible can and making it very difficult for White.

At the same time, White still has to pay attention to the fact that this little move, g4, could take place at any time.

In my opinion, this is a much safer way for Black to reach an imbalanced position which still offers some slight problems for White.

So much for bishop to c4. The other critical move in this position is pawn to 4.h4. By moving the pawn to the key square on h4, White cleverly ensures after this standard move, 4…g4 5.Ne5, Black does not have his check on h4 since the rook now covers the h4 square.

Furthermore, the king side pawns are now rather loose as the g4 pawn is attacked two times and the f4 pawn has also lost its support.

However, once Black makes peace with the fact that White shouldn’t have too much difficulty recovering the sacrificed pawn, he’s free to look for ways to pursue a counter attack in the center.

There are still a few factors working in Black’s favor. Firstly, Black could consider a rapid attack on the currently unprotected e4 pawn. Also, since White will probably eventually take on g4, Black can prepare Rook g8 exploiting the newly opened file.

Now, one critical book line for Black here is the surprising move, 5…d6. With d6, Black is making no effort to preserve the extra pawn on the king side, but is instead looking for piece activity. So after the move, 6.Nxg4, Black continues 6…Nf6.

The knights quite often exchange on f6, and we reach an interesting position where Black is no longer ahead a pawn, but all of his pieces have very good scope in this position.

For example, the G-files have opened and look very attractive of the rook, and the queen side piece have very little difficulty getting deployed, perhaps knight to c6 and the bishop may make its way out to g4 especially if you get this rook on g8.

Also, the queen is in a secure and active location on f6.

White still has problems achieving, 8.d4, since in this case, Black would get excellent counter-play with the move, 8…Nc6.

It’s definitely not in White’s interests to to play 9.d5 since this would give the knight a very attractive square on e5 with attacking chances in this position.

Instead, White would have to play something more natural, like 9.c3 or bishop to 9.b5. But then 9…Rg8 will be an excellent reaction and Black has a very comfortable game going ahead.

So, White normally does not play the move, 8.d4. But he instead plays 8.Nc3, and this leads to a highly unclear position with about equal chances for both sides.

Backing up to the position after 5.Ne5, a more aggressive strategy for Black in this position is to play the move, 5…Nf6. This is with the idea of creating counter-play against the e4 pawn. So after the move, 6.Nxg4, which is probably not a good idea in this position, Black can simply play 6…Nxe4

Not only does this allow Black to preserve his extra pawn, but it also means that the knight is very close to this attractive square on g3.

Now, for example, if White simply plays the move, 7.d3, Black’s knight has no trouble reaching the g3 square.

The move queen to 7.Qe2 is also not really used since Black simply plays queen 7…Qe7, and once again White will have to contend with the possibility of the knight appearing on g3.

Another tempting reply to 5…Nf6 is 6.d4, grabbing more central control and building an attack on the f4 pawn.

But here, too, Black is going to get a great game with the move, 6…d6. Not only does this move push the knight back, but it also gives us a second defender of the g4 pawn, which means that White simply has to retreat, 7.Nd3.

Now, Black’s pawn structure on the king side may look a little overextended and this is probably true.

But Black has successfully preserved his extra pawn, and White is actually slightly behind in king side development. Thus this line, too, ends up quite nicely for Black.

In my opinion, and in the theory opinion, there’s only one really strong move for White in this position, and that is the move, 6.Bc4, beginning an attack on f7.

Now, Black has to know the recipe to reach a decent position and that recipe goes 6…d5, blocking the bishop’s diagonal and returning the pawn back to White.

So, then after 7…exd5, Black now simply continues with his development,  7…Bd6 developing very rapidly. Finally after 8.d4, Black needs to be sensitive to the fact that White has opened up an attack on f4 pawn.

So Black defends his pawn with a slightly unusual move, 8…Nh5.Once again, we’ve reached an unclear position, but I think Black has some reasons to be happy here since his pieces are very actively placed.

His kingside pawns are a little vulnerable, but with careful play there should be winning chances in this position for both White and for Black.

On the one hand, you may have achieved some of the complicated and sacrificial positions where you might get a juicy attack with White with sacrifices.

However, if you’re not careful, you may also just simply end up down a pawn or even down a full piece in certain cases. As always, a little homework will go a long way towards defeating your opponents.