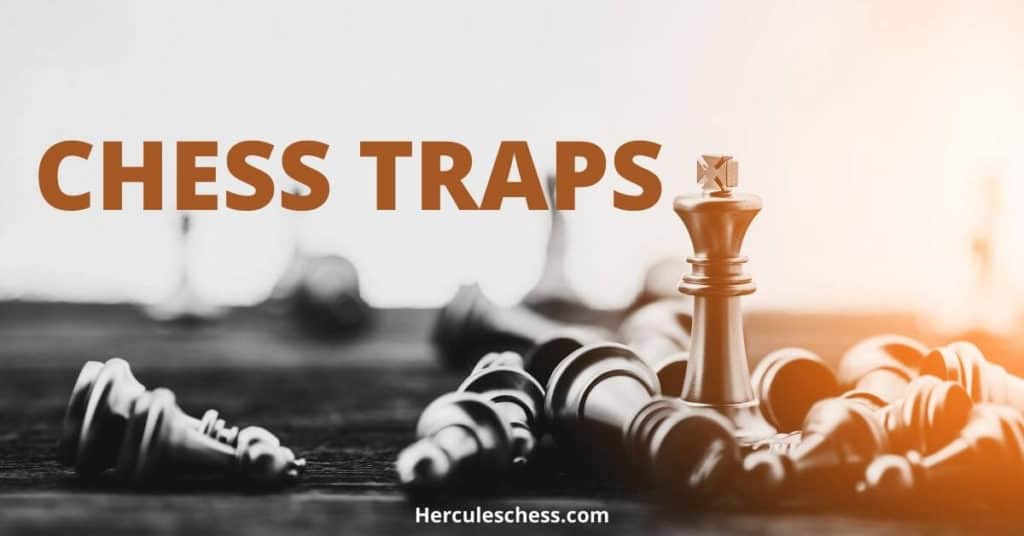 Everyone likes the idea of trapping his opponent in chess. Picture the following: You are in the middle of a long, hard struggle with your nemesis, Pit-bull Hogan. The game has been even for a long time when suddenly, you seem to have made a grave error! Pit-Bull triumphantly captures your Queen, a snarl on his lips and triumphant gleam in his eyes.

He looks for signs of the panic that he knows you must be feeling. Instead, you calmly make your move and call “Checkmate!”

Doesn’t that victory taste sweet? Of course it does! However, I must burst your bubble with a dire warning. Don’t play for traps! Always make moves that deploy your men in a way that helps your position generally.

Never play a move that puts you in either of the following emotionally charged situations:

On occasions you’ll find yourself facing an opponent who stumbles into one opening trap after another. ON other occasions, your opponent will be the one who is baiting the hook. To successfully trap or avoid being trapped, you must have some familiarity with the basic types of traps:

The basic types of chess traps include:

The first type of trap is based on the weakness of the pawns on square f7 and f2. In the opening phase of a game, the f7 pawn becomes a major target of White’s attack. Black must be very careful that catastrophe does not strike him on that square. Equally, White must be careful about the pawn on f2.

The pawns are particularly vulnerable because they are protected only by Kings, in contrast with the other pawns in front of the Kings. The Black pawns on both d7 and e7, for example are protected by four pieces. White would like nothing better than to penetrate the line through f7 and launch a major offensive against the enemy monarch.

Here are some of the ways of setting traps against the f7 and f2 squares: 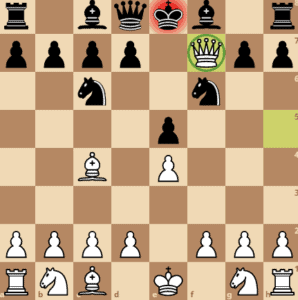 Very nice, but what if Black had seen White’s threat of checkmate and has taken decisive measures? Instead of 3…Nf6??, Black should have played 3…g6 then White would play 4.Qf3 (White deserves credit for perseverance! He would once again threaten checkmate on f7. Then Black would play 4…Nf6 and, instead of the results shown in the diagram above, all would be well.

I can’t recommend the Scholar’s mate tactic because if Black sees the threat (and he usually will) the White Queen will have developed too early and will, as a result, lose time as it runs away from the Black pieces. 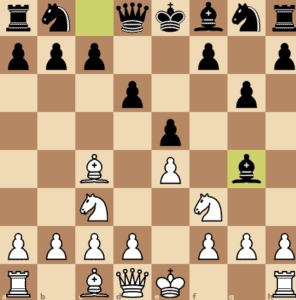 Black has ties down White’s knight on f3 with a pin. However, his Bishop is undefended on g4 and White’s army is better developed. White can now launch a surprise against square f7.

White seems to have gone berserk!

Black should now limit his losses and play 5…dxe5, to which White would respond 6.Qxg4. However, instead of losing a pawn, Black eats White’s Queen as most people would.

As the diagram shows Black ate too much and got heartburn.

Chess Trap #2: The Case of the Undefended Piece

The Legall’s mate move 5.Nxe5 would not work here because Black can play 5.Nxe5! to prevent the checkmate and defend the Bishop on g4.

He would do better to play 5…Nf6, simply depending the Bishop on g4.

The Knight checks, thereby uncovering a Queen attack on the Black Bishop, a perfect example of a discovered attack.

White has now gained a pawn. When you first start playing chess, you should be very careful about snatching pawns in the opening. You Queen can often get caught dipping her hand into the cookie jar as you’ll see in this example. 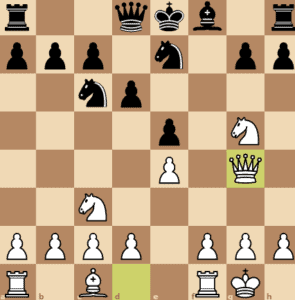 The Queen That Never Comes Home

White has initiated a discovered attack on Black’s Queen. Because Black is in check, he can do nothing to defend the Queen. Note that 6…Nc6 would not help, because after 7.Qxd4, the Black Knight would be pinned by the Bishop to his King and would be unable to make a capture. 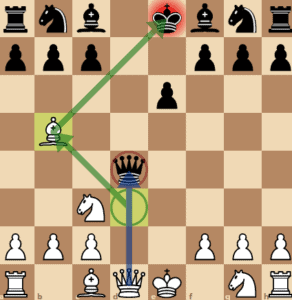 Discovered attacks on far-flung pieces are common traps, and you need to understand them completely in order to foil them. At this point, though, you should concentrate on recognizing the danger of allowing an advancing piece to go undefended.

The final type of trap is based on dismantling the enemy King’s cover, otherwise known as playing for a devastating check. Having the skills to blaze a trail to the enemy King is important. Sometimes, however, your opponent cooperates before you can display your skills. Probably the most famous example of an opened-up king is the Fool’s Mate.

This move is called the Bird Opening.

For no reason whatsover White has opened up his own King to to attack on the e1-h4 diagonal. 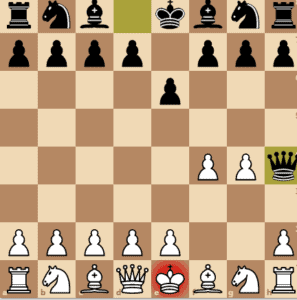 Let’s look at another example of how you can blast through the enemy’s defense:

Black is not tempted by 2…Qh4+, which would be adequately countered by 3.g3, when Black’s Queen must retreat.

Black has sacrificed a pawn so that he can obtain a lead in development. This type of deliberate sacrifice in the opening is called a “Gambit”.

Oops. White didn’t see the threat. He should have played 4.Nf3 which would develop a piece and prevent …Qh4+, Black’s next move

We reach the final position of the game. It should now be clear to you why the King is not safe in his starting position and why I recommend that you castle as quickly as possible. There is one more type of trap I’d like you to look at: 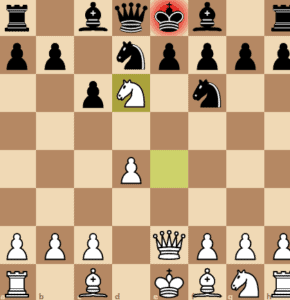 As you can see, the Black King has no way to get out of check, and he cannot capture the rude Knight because the e7 pawn is pinned by the white Queen. This maneuver is called a Smothered Mate.

Looks great doesn’t it? Why then do I call it a cheap check? Because if black sees the threat, White’s fifth move (Qe2) would prove to be a liability. Let’s say after 5.Qe2 Black says to himself “Aha, I see what he’s up to. I won’t let him do that to me!” Black then plays 5…Ndf6 while his Queen guards square d6 and unveils an attack against the d4 pawn.

The defects of White’s fifth move are then clear: White has taken a defender away from d4 and blocked his Bishop on f1.

The moral: Never make a move with the thought “ I hope he doesn’t see it”. 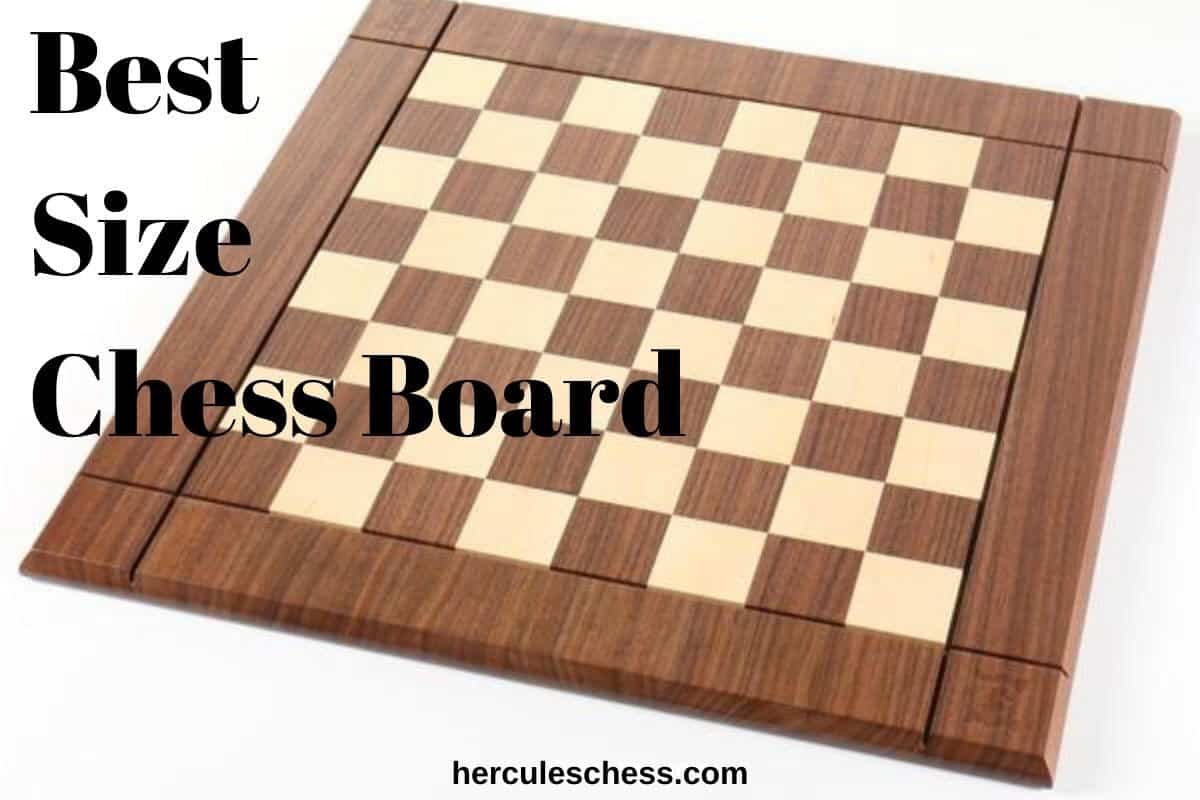 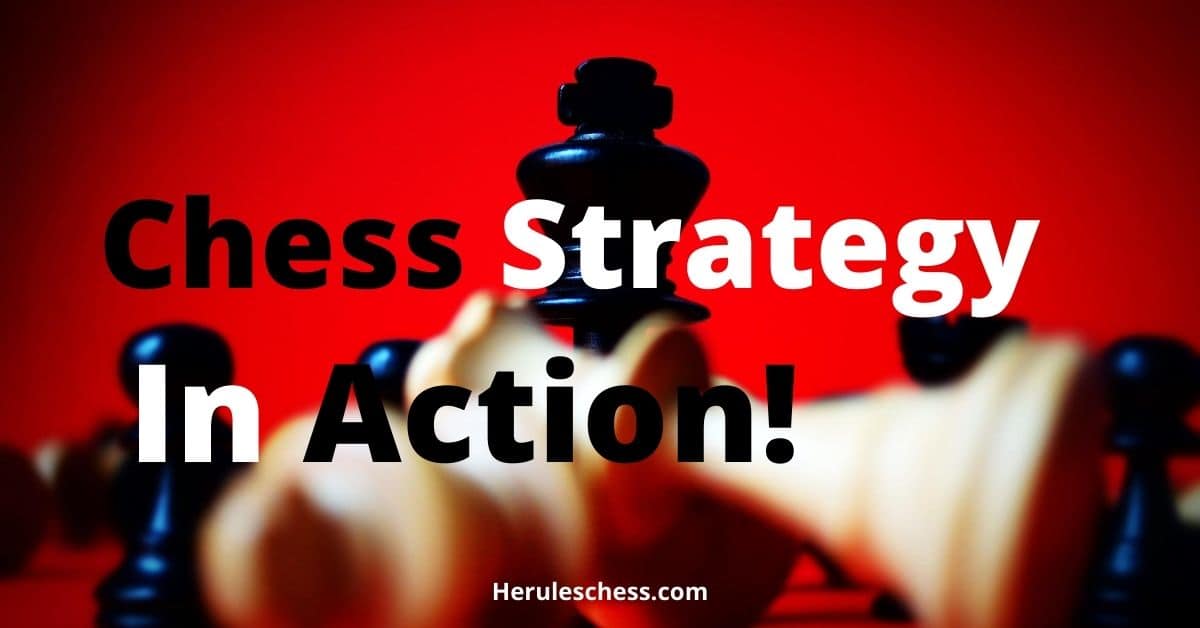 If you are lucky enough, all you would need is a strong opening and an opponent who doesn’t see through your opening to be done with the game in a jiffy. For the rest of the unlucky people, they will have to play till the end of the game. If you aspire to finish the […]

When it comes to chess, there are some dos and don’ts that you need to take care. In this article, we will look at some of these. Dos of Chess The very first thing to do is keep asking yourself questions. These questions should be along the lines of… What is my opponent up to? […]